‘Door in my head’ was the first project of a group of artists who shortly afterwards officially continued as an artists’ collective under the name Zuiderlink. The project consisted of a working period of 6 weeks in an empty house at Laagstraat in Tilburg, ending with an opening and exhibition. More about the entire project and the other artists can be found here.

The project ‘Door in my head’ has been an important step for me in going public with my work again. Firstly, it was a long time ago that I found myself among fellow artists and outside the safe walls of my own studio. Secondly, the project required me to reflect within a few weeks on the new environment and situation, the background of the temporary workplace, the temporary new colleagues and the surroundings of the occupied house. What would my role in this be from my own position and background?

I started with a number of preconditions. I wanted to work with the place I was in, this specific house. I did not want to paint, something I mainly did at that time. And I was not allowed to think too much but had to start doing, there was simply no time to think.

The house where we had taken up residence had previously functioned for several years as a shelter for status holders. Young boys of around 18 who were placed in a room in this house by the municipality. Although there were five rooms and room for five residents, stories from people living in the neighbourhood showed that in reality, the rooms were often overcrowded with people, sometimes more than 15 per room. A distressing situation for young adults, uprooted from their own country and ending up in this house without any guidance. It is not difficult to imagine that hopelessness and despondency will then play a role.

When we moved in after the house had been cleared by the housing association, the neglect that had arisen in this house was clearly visible. Nothing seemed to have been maintained or cleaned, dirty clothes disappeared into the ‘cellar’ under the stairs, the toilet and bathroom were too dirty to use and you could park a bicycle against the stench. The dreams I had the nights after my first visit to the house were dark and were about hopeless situations, despondency and losing your identity, while trying to hold on to the little bit of recognition you can still find with each other.

Armed with the necessary litres of detergent, gloves and white latex, we set to work to make the house ‘our own’, after which the work period really began. 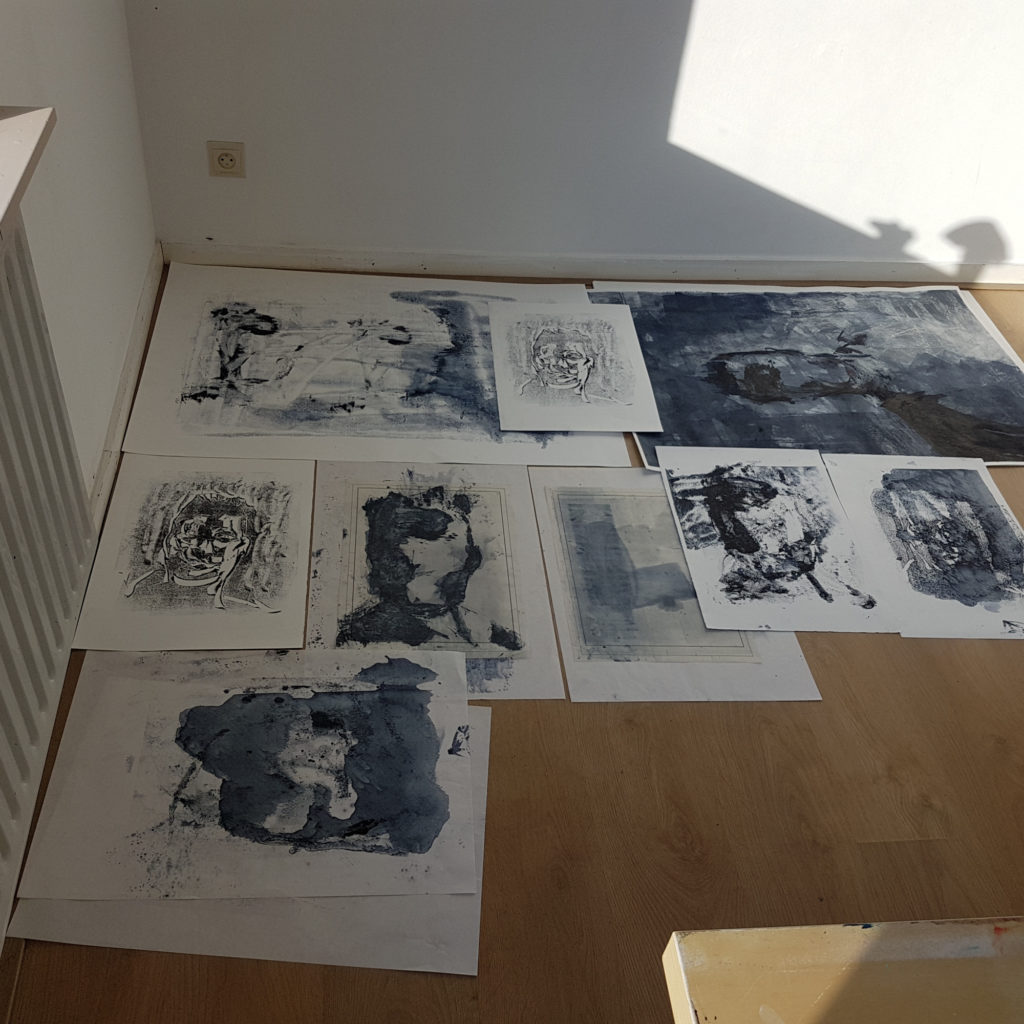 I got myself a room on the first floor. There was a lot of light coming in and I looked out over a gigantic garden, which made the heavy feeling I initially experienced in this house less dominant.

With a table on trestles, loads of leftover paper from my studio and etching ink, I installed myself. On the inside of the door, in front of the small window, I found a Hema index print with small photos, something that had managed to escape the earlier eviction. The same boy appeared repeatedly on the small pictures. Perhaps the previous occupant of this room? I decided to get to work on this. Moving into this house felt a bit like a takeover and I felt the need to let these unknown boys remain present in the house for a while.

I started making portraits based on the index print. Monotypes and collages were used to create various faces. Recognisability and resemblance were not important. It was more about posture and appearance, the feeling this whole thing evoked in me and wanting to maintain a presence. 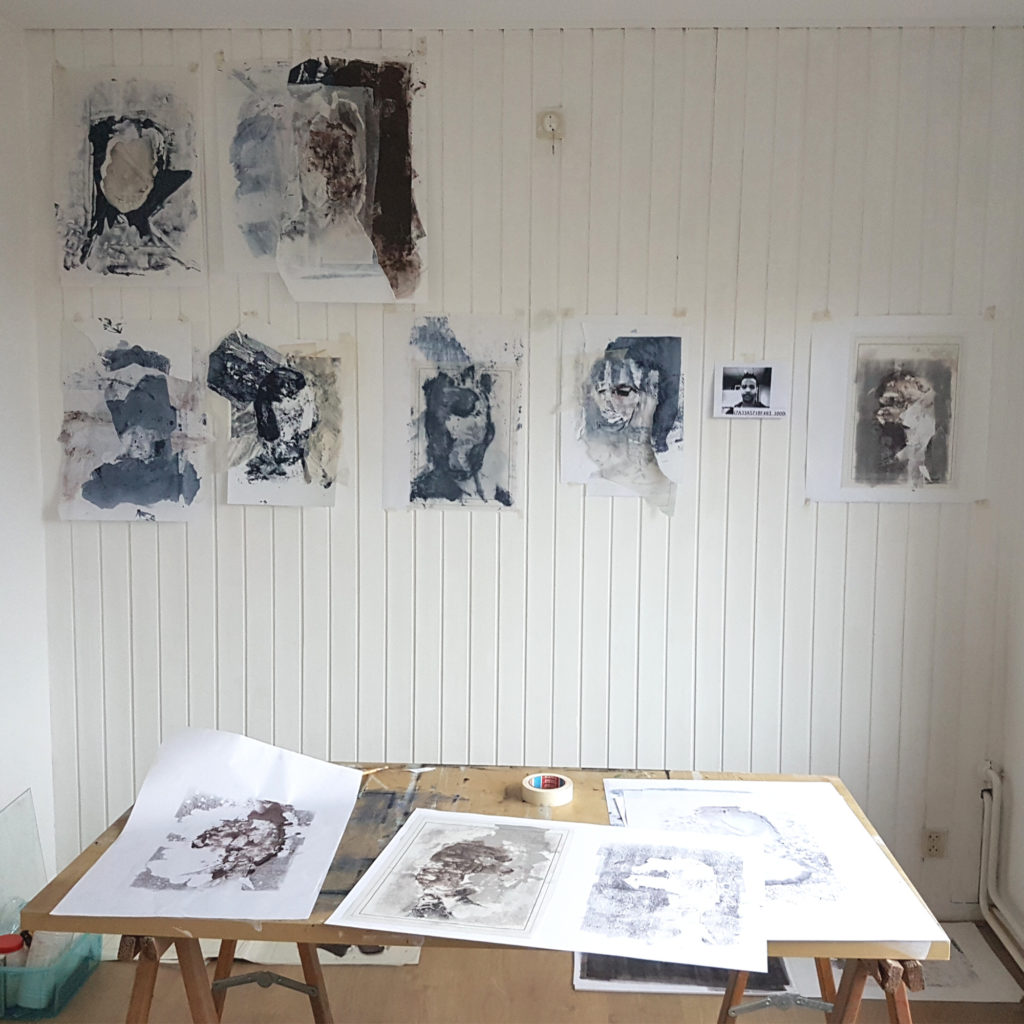 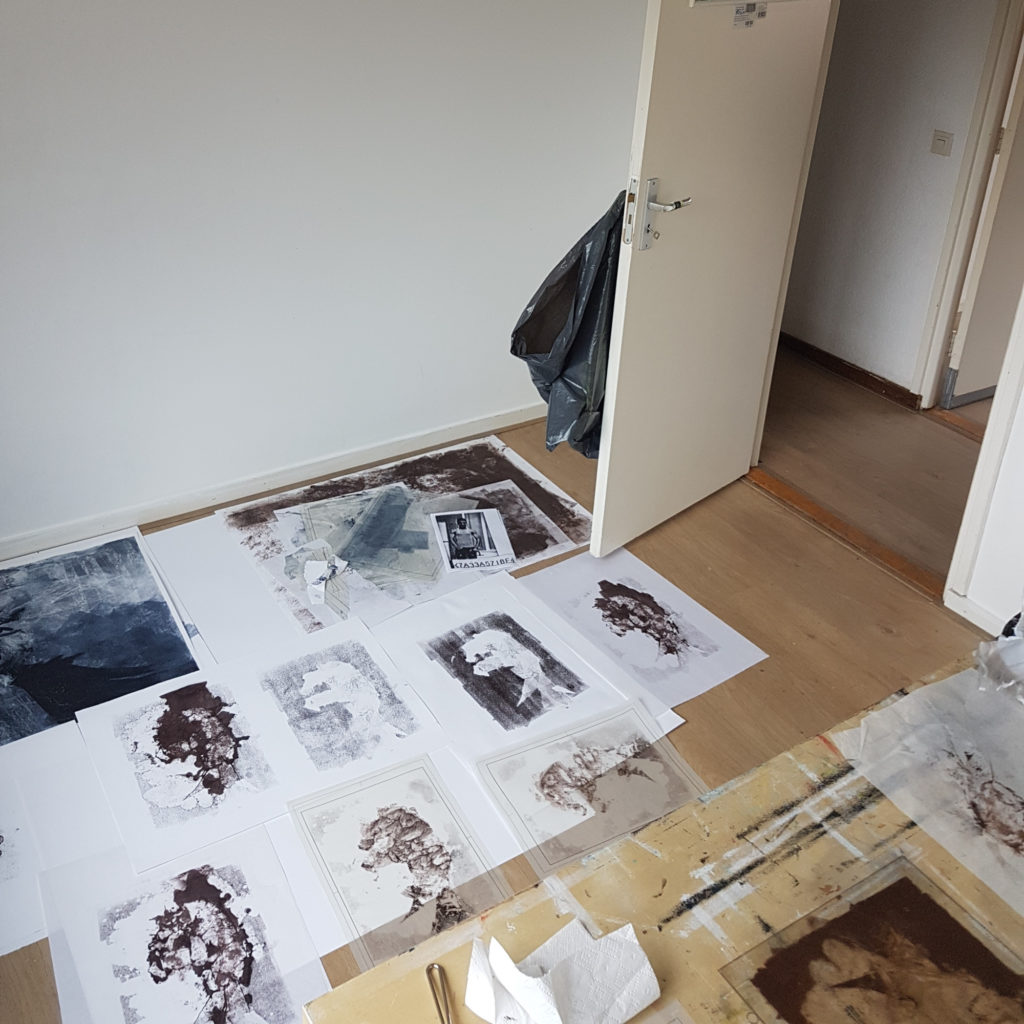 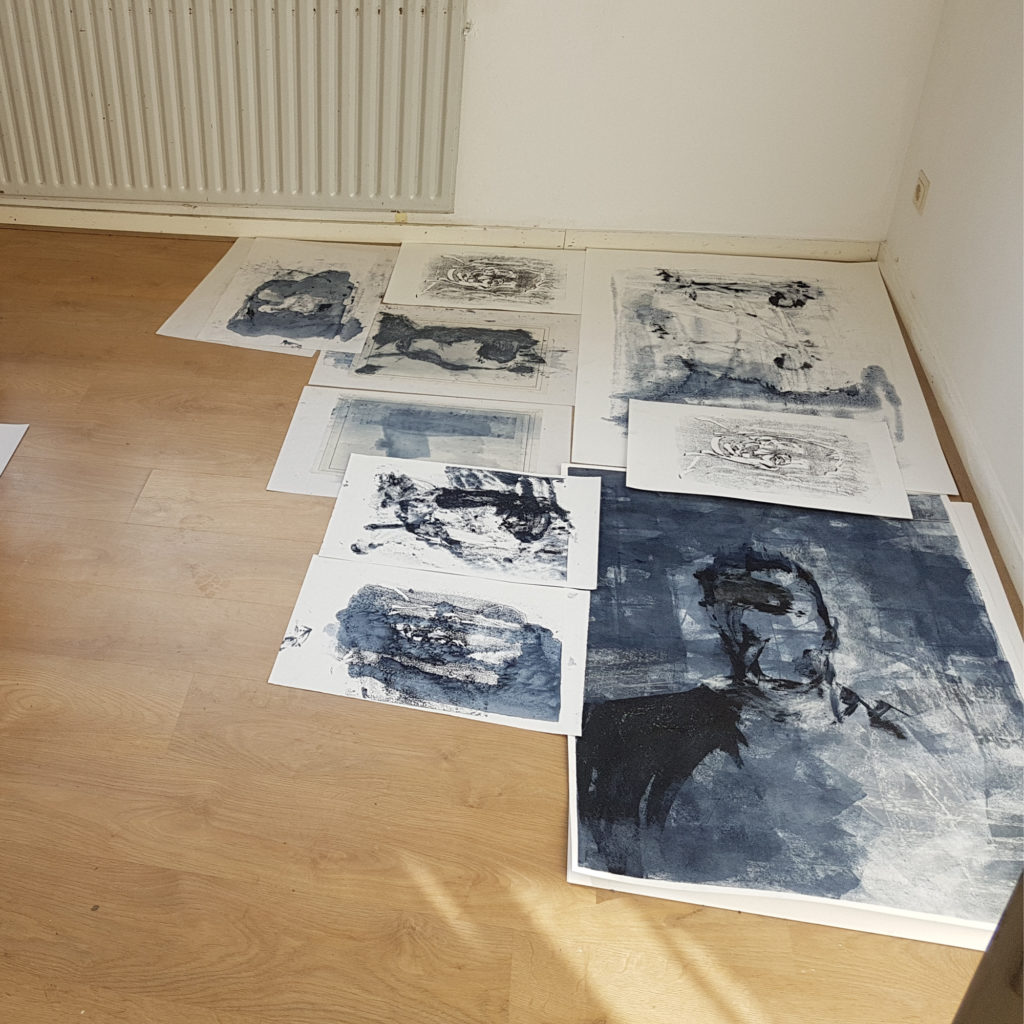 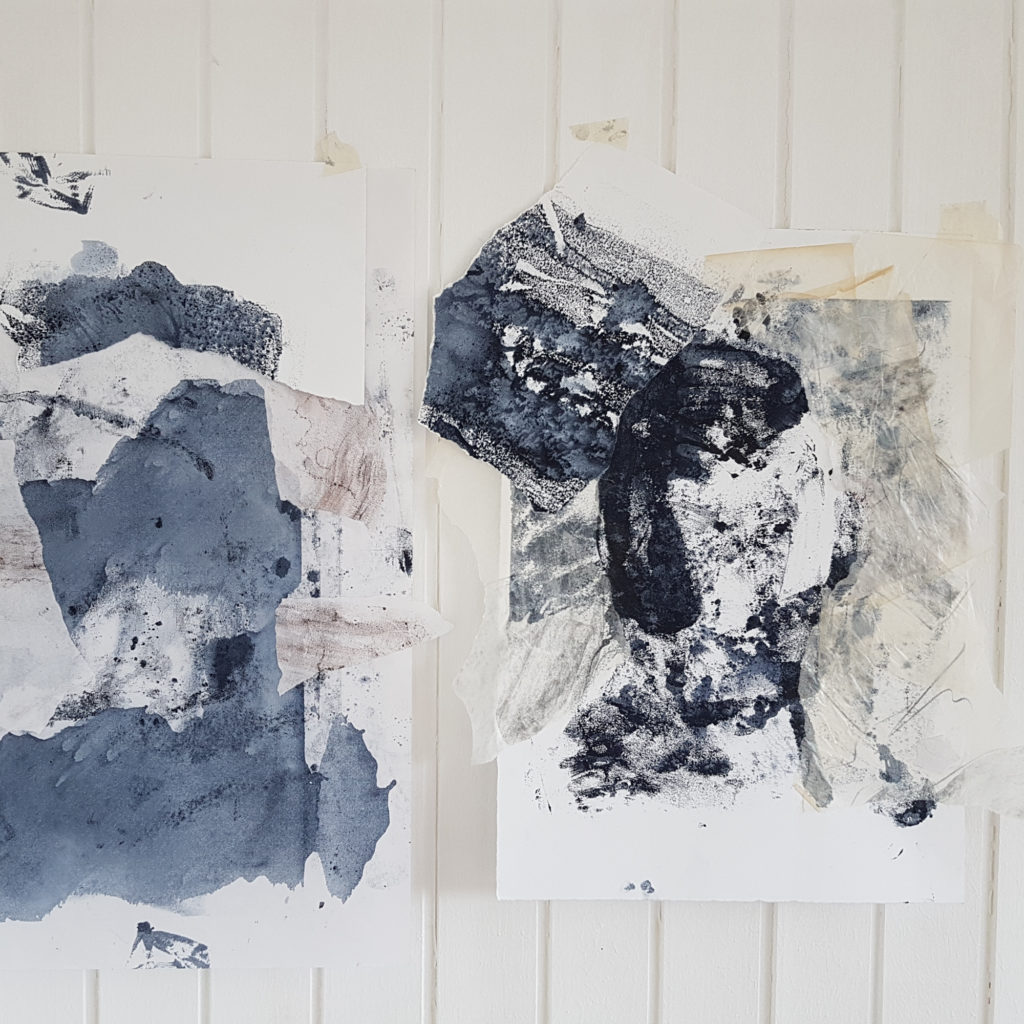 After a series of individual portraits, I started working on a group portrait. In this way, the boys became part of a social structure again. A kind of family formation emerged from this. 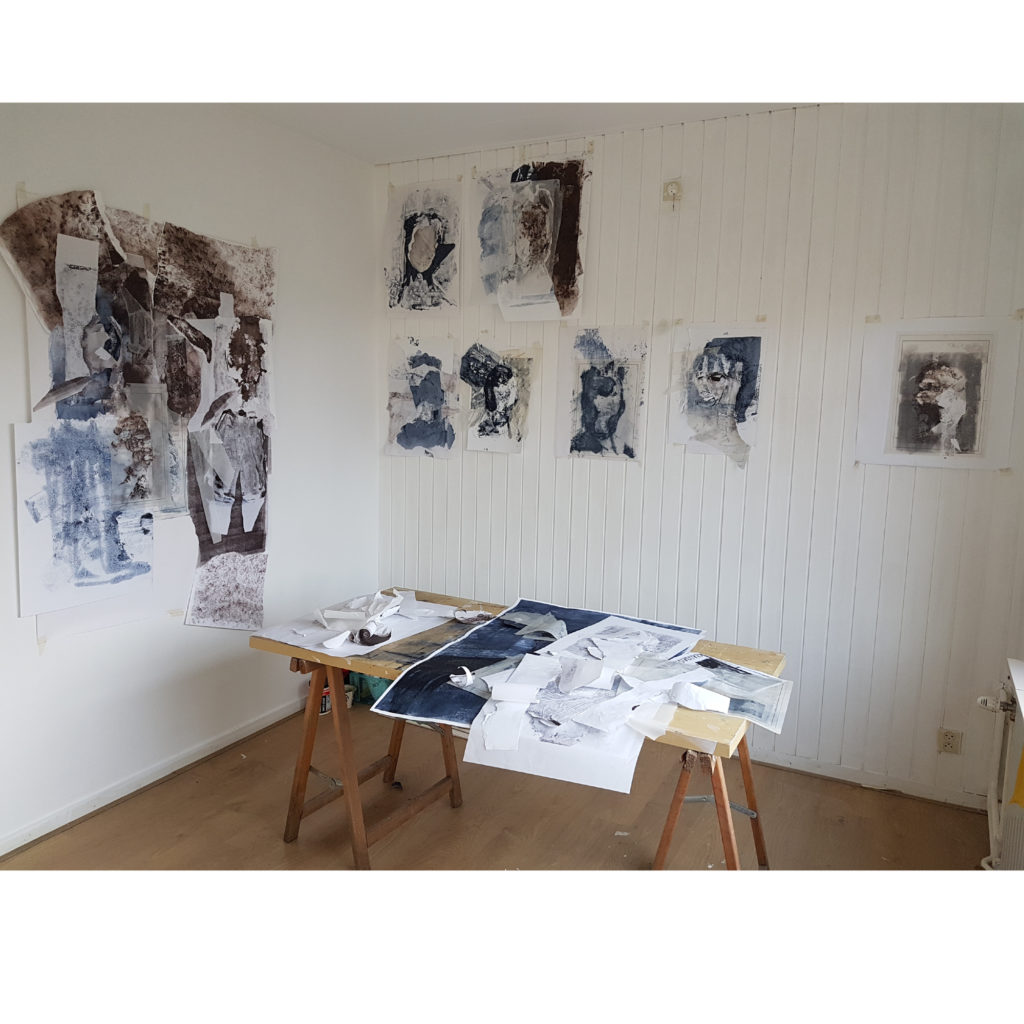 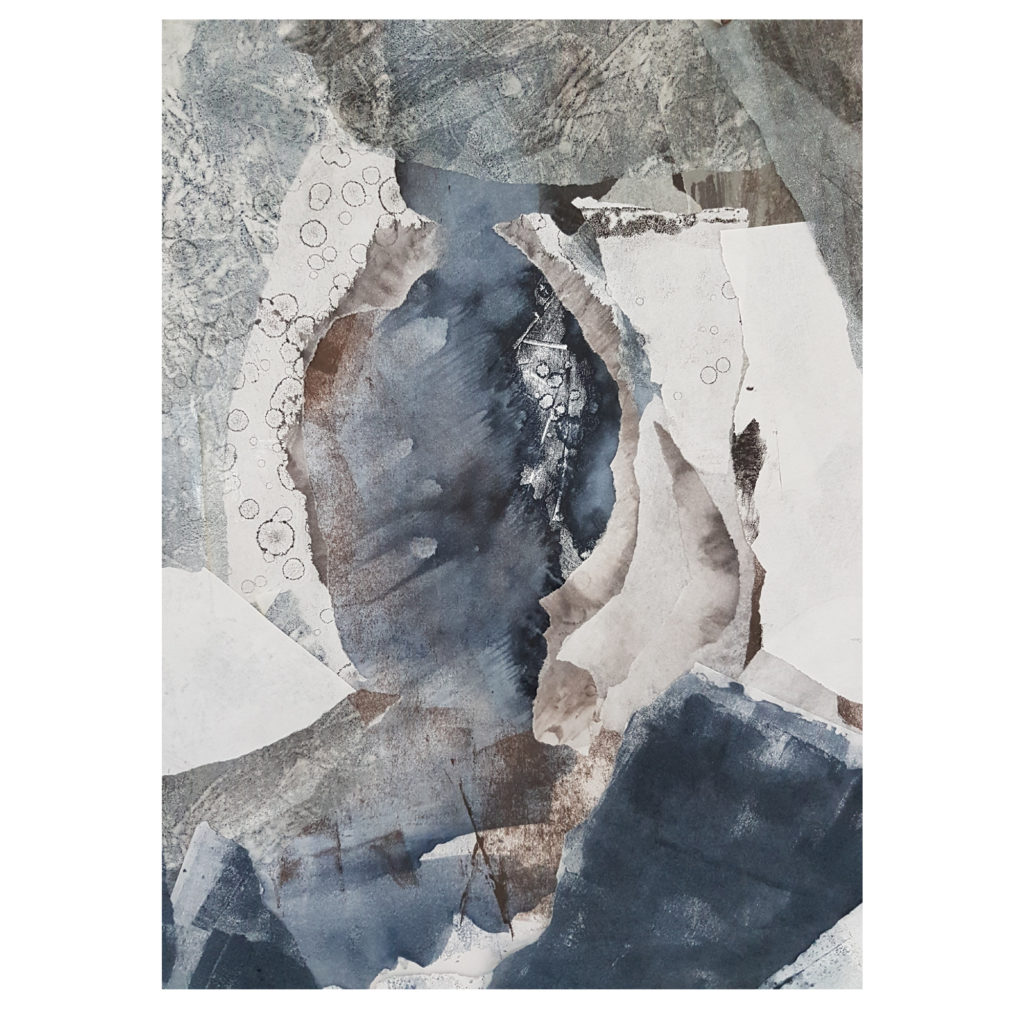 Finally, I started working on a new group formation. This time, I wanted to stay away from the ‘family’ feeling. Besides the fact that all these portraits are based on my personal assumptions and interpretations, what they certainly didn’t have was a family relationship.

In this portrait, I wanted to portray the boys as a group of allies, at the mercy of each other because of the same situation. Equal to each other and to the viewer who visits this space.

Meanwhile, the name on the Hema index print and social media led me to suspect that this boy came from Eritrea. To give these portraits a basis, I used the coordinates of this country in the title of these works. 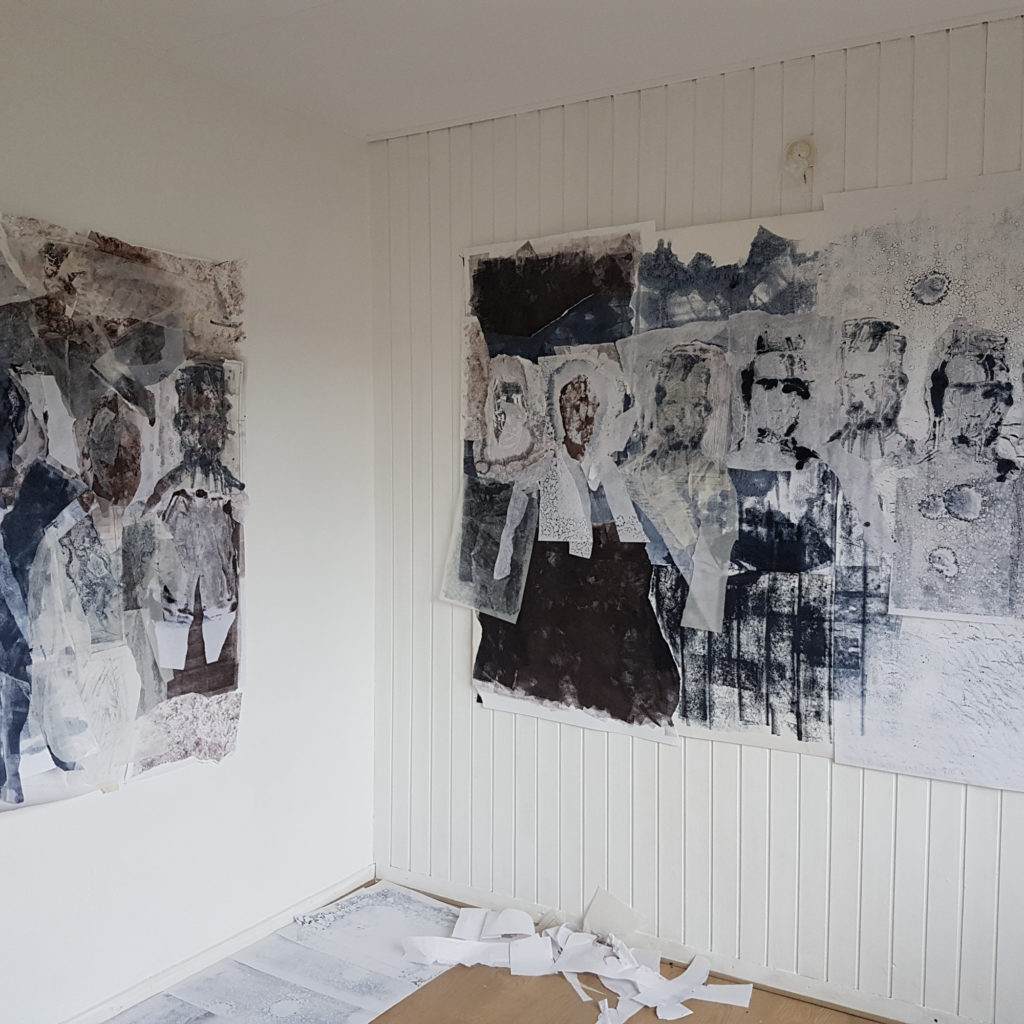 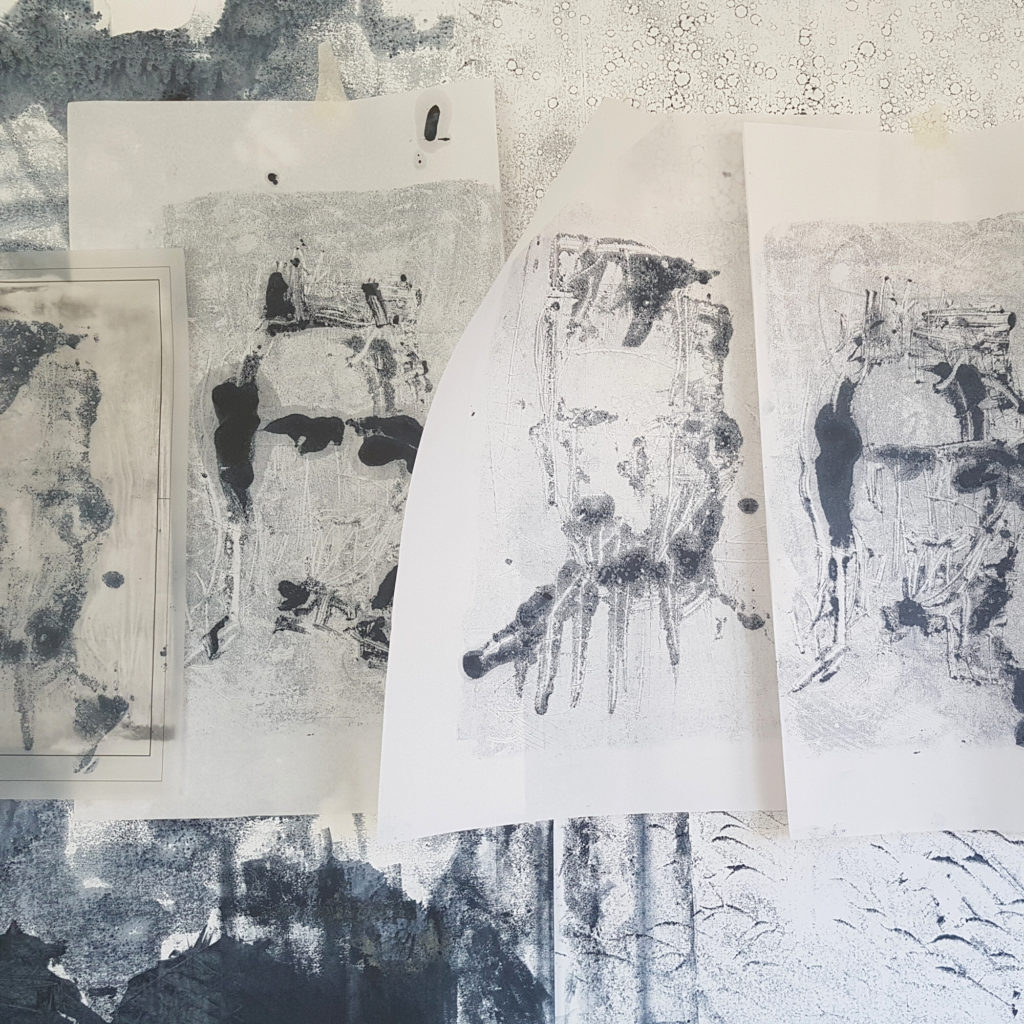 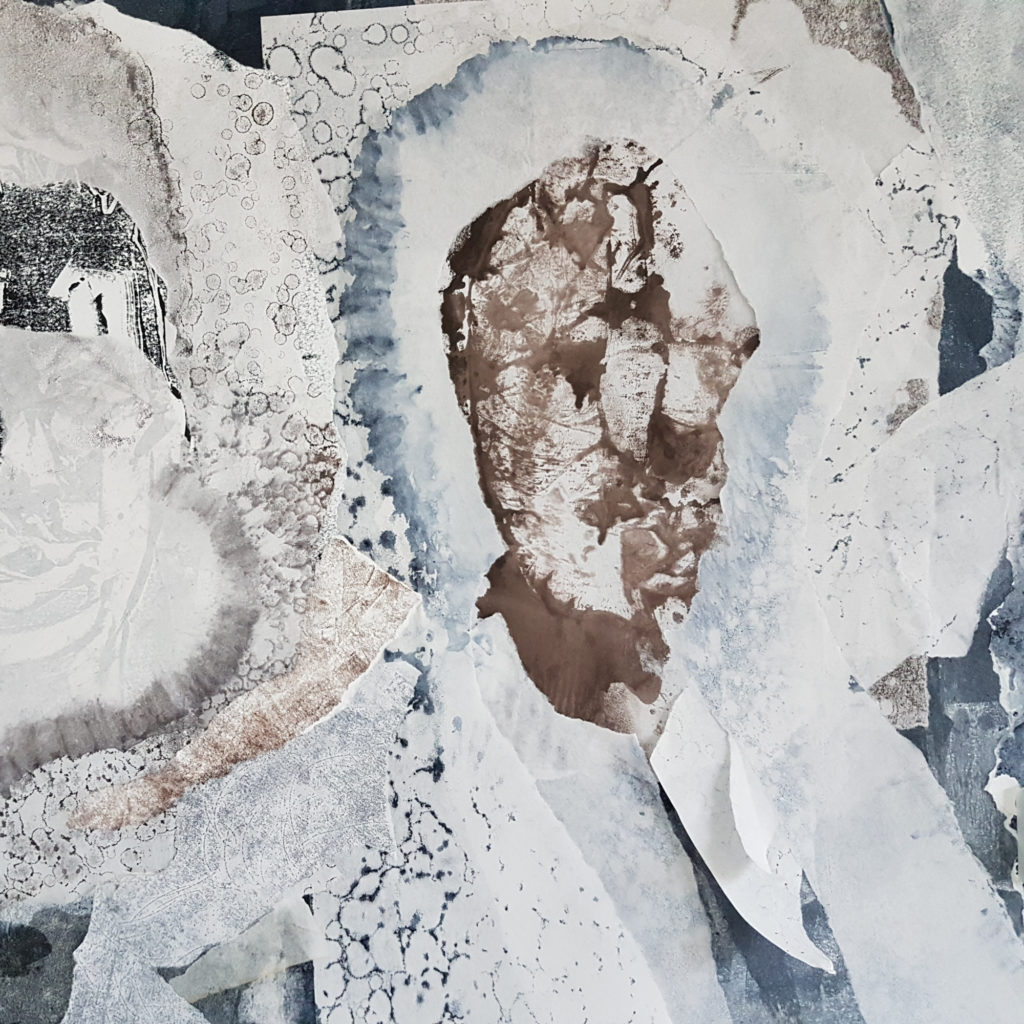 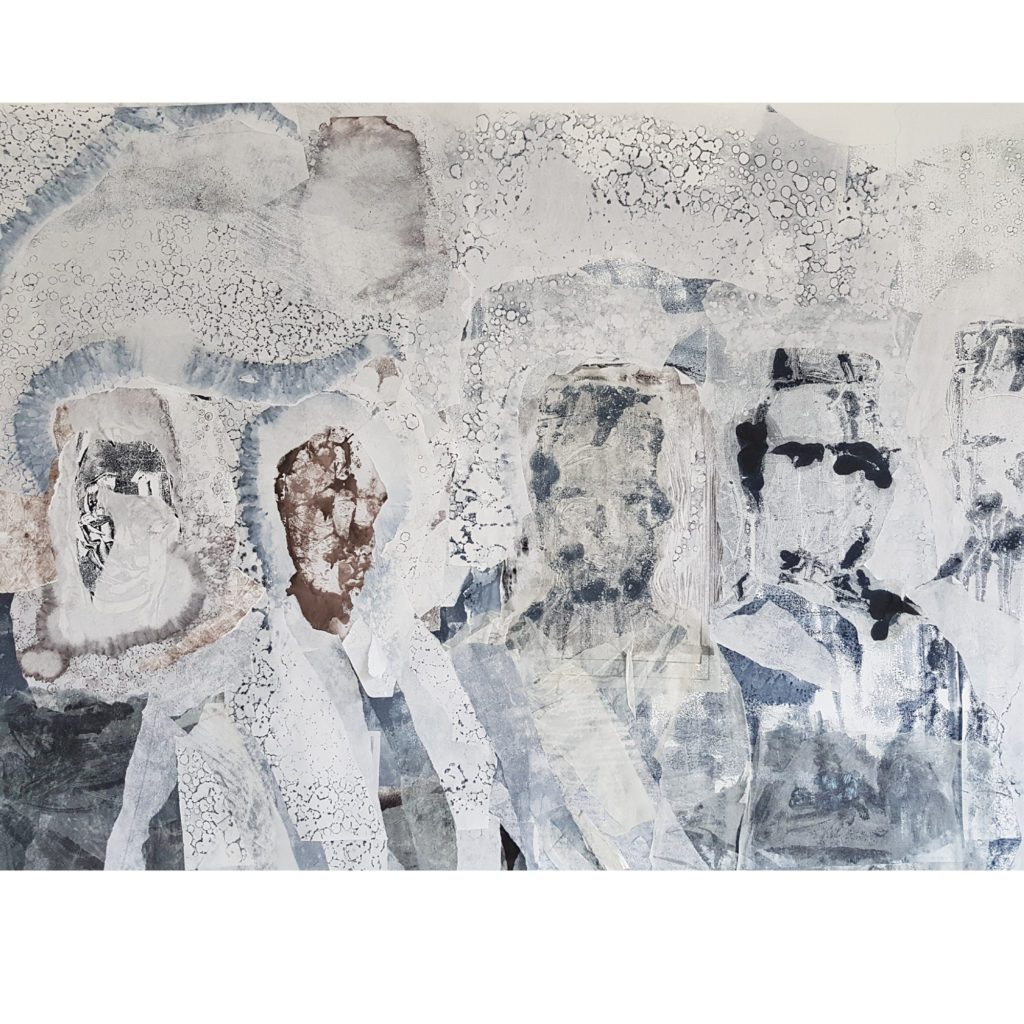 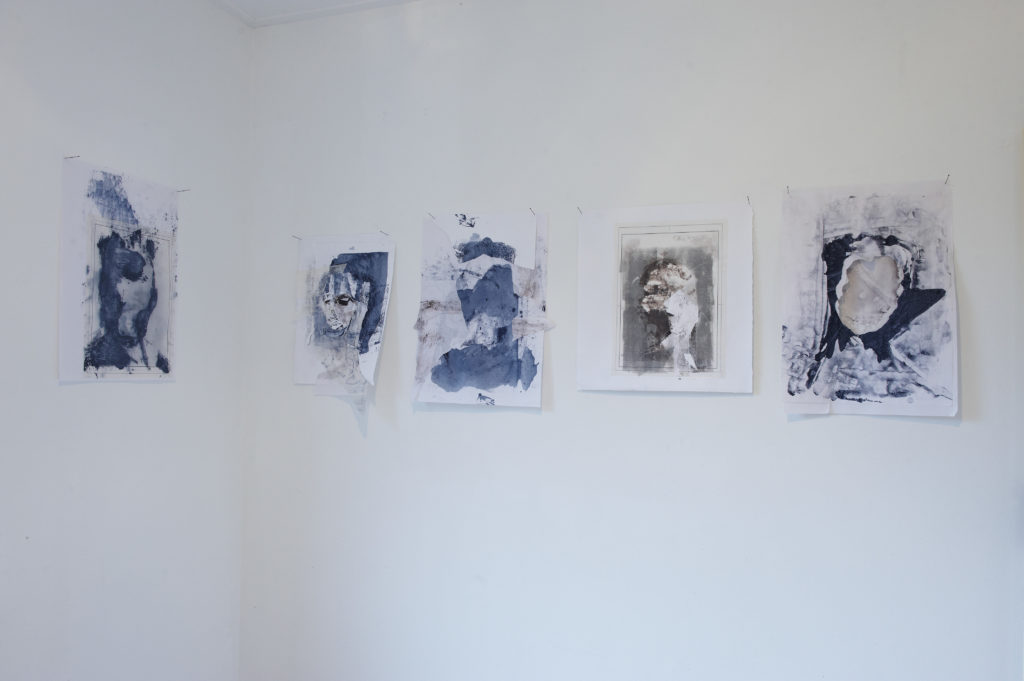 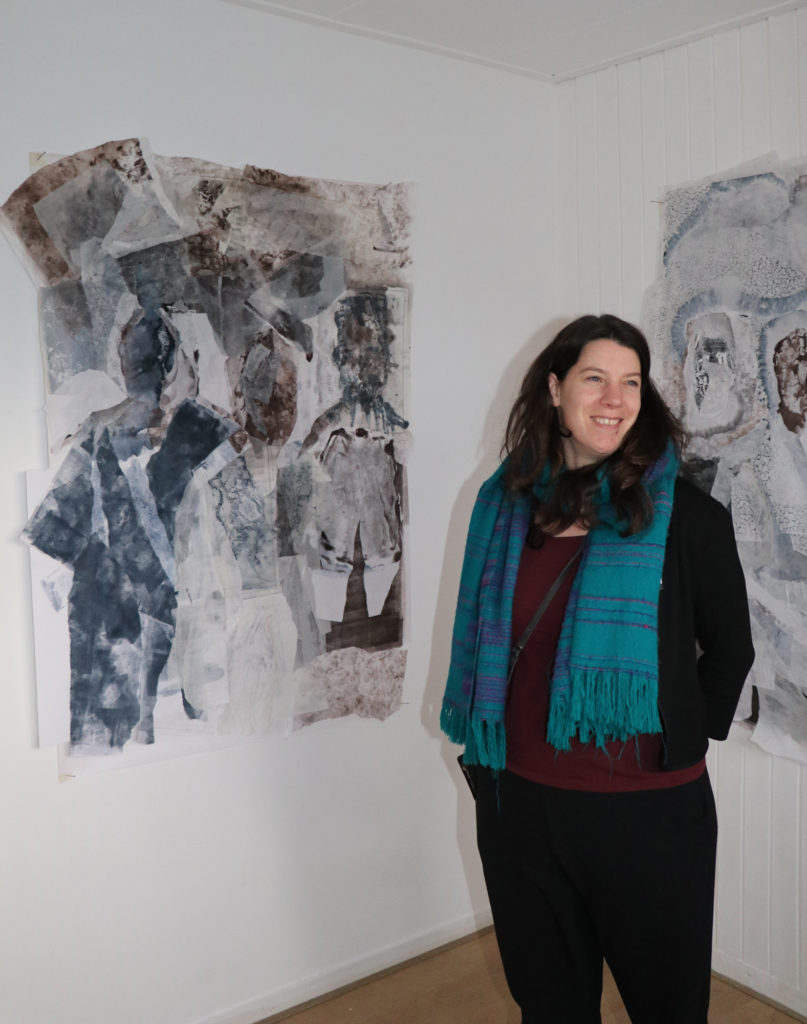